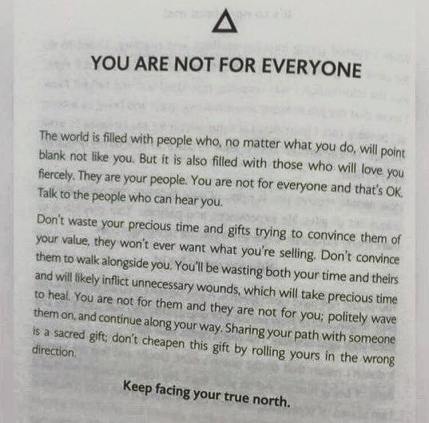 Seen this pic floating around the interwebs? Sounds like a nice idea, yes?

Yes. It is nice. It’s a nice idea for how to live your life. It’s also super useful for learning how to face your fears as an actor.

(FYI it is apparently an excerpt from Light is the New Black: A Guide to Answering Your Soul’s Callings and Working Your Light by Rebecca Campbell.)

I’m not talking about ‘stage fright’. I consider stage fright to be another kettle of fish, where you are struggling with an extreme fear, which might manifest physically (vomiting, shakes, shortness of breath, etc) and actually stop you going on stage. Here I’m talking about milder anxieties, which won’t stop you performing, but are still significant and will hold you back from me being the best actor you can be. And most actors have them, particularly when you first start out.

Here are some anxieties that I’ve heard over the years:

“I hope they can hear me in this big space.”

“I hope the audience is nice.”

And so many more.

Often these thoughts are not just subconscious, but regularly vocalised in rehearsal or backstage. While it’s normal to have these thoughts, they are generally not helpful to you or anyone around you. You need to learn to kick them to the kerb as soon as possible. You probably know that – but it’s often it’s hard to gain control over these negative thoughts.

Personally, I have learned to face my fears in two major ways.

I hope you are brave and can remind yourself of these positive concepts every time you audition or perform. I’d love to hear from you about what works for you – have you found your own way of facing your fears?